In one of my previous roles before becoming a business owner, I worked as a general manager at a global manufacturing company. I had the fortunate opportunity to lead a $500 million business unit operating eight global manufacturing facilities located in China, the Czech Republic, Slovenia, Mexico, Brazil, and the United States. I remember relating to the work of Thomas L. Friedman in his best-selling book The World Is Flat: A Brief History of the 21st Century (April 2005), which analyzed globalization, and his view of a new level playing field.

The decision I was making seven years ago of whether to put a new manufacturing cell in China versus in our existing facility in the United States is not so dissimilar to what forgers are likely trying to decipher today. However, the main difference now is the pace of automation, and how that changes the decision matrix. It is not just about finding the best labor arbitrage anymore. You also must account for automation and what hourly wage you are going to pay for that technology.

The World Is Flat

Thomas L. Friedman made the point in 2005 that we are now in a world with a level playing field, in which all competitors, except for labor, have an equal opportunity no matter the geographic boundaries. Friedman argued that technological innovation, foreign investment, capital flows, and trade were transforming the world — breaking down national borders, constraining governments, and triggering grand struggles between nationalism and the forces of economic integration.

I find it intriguing that Friedman’s globalization depiction aligns very closely with the industrial revolutions witnessed, starting in the 1800s. Now, nearly two hundred years after the start of the first Industrial Revolution, we are in the middle of the fourth Industrial Revolution, often referred to as Industry 4.0. Developments in automation and data in manufacturing technologies have resulted in a new era of smart factories and intelligent manufacturing. These technologies are not only changing how we do business, but for manufacturers, it changes how we make investment decisions.

One of our customers at Feedall Automation is Linamar. Linamar is among the top 100 automotive suppliers globally in terms of automotive parts sales and has 61 global manufacturing facilities. They know manufacturing and forging as well as anyone, and I have found they are always looking for better manufacturing solutions in their facilities. Early this year, I had the opportunity to speak with their engineers about some of the technology that Feedall was developing for robotic bin picking. In doing so, I learned how they think about automation investments and technologies. In today’s competitive environment, manufacturing companies have to continually invest to be more productive.

This has enabled companies not only to make processes more efficient, but also to give leadership and shop managers better quality and predictability of their equipment and output. That is great to say, but how should you look at these types of automation decisions if you are not an expert like Linamar? Here is what I came up with from my daily interactions with companies trying to find equipment solutions to solve everyday problems. I will warn you, these are not always the conventional ways of looking at making investment decisions.

1. Return on Technology (ROT vs ROI)

As a manager in the manufacturing world, the one question I am sure you always get from your team is “Can I have money for this project?” 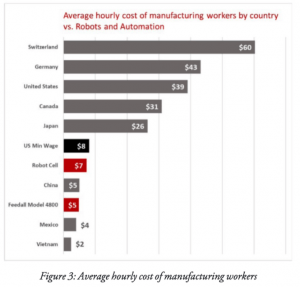 My response to that question has historically been: “It depends on the return we get for that investment (ROI).” In business school, I learned that the proper way to measure these types of investments is to put together a discounted cash flow model. Discounted cash flow (DCF) is a valuation method used to estimate the value of an investment based on its expected future cash flows. It attempts to figure out the value of an investment today, and is based on projections of how much money it will generate in the future. A simpler way to look at this is by using payback: How long will it take to pay back this investment? A rule of thumb that many manufactures use is to require projects to have less than 18-24 months.

However, this strictly financial approach leaves out some intangible factors also required to be included in the discussion. For example, if you do not already have a robot in your facility, it will be very difficult to justify and meet the 24-month payback threshold set by your ‘bean counters’. An industrial robotic cell will cost you a minimum of $200,000 and if you want to add the latest vision technology — which Feedall can provide — it will be over $300,000. So, how do you justify this expense if you cannot meet the financial threshold?

My recommendation is to look at using a Return on Technology (ROT) method (yes, I just made this up). The investment needs to be broken down into traditional capital investment and “Technology Investment”. The technology investments need to be seen as research and development in which the value will pay off over a longer period of time for the company. The second and third robotics cell will have a higher value which will eventually carry the full burden of the capital. As a supplier of capital equipment and automation, we need to do a better job of helping manufacturers understand the return on the upfront capital and technology investments. Feedall works with customers to outline the payback on our equipment.

We spend the time upfront with customers to better assess the solution they need and work with them to justify the upfront capital costs. Once the decision is made to move forward with a new automation system, the next thing you need to consider is who will support this new technology.

Analysis shows automation is likely to push output potential far ahead of demand potential. The rapid spread of automation may eliminate as many as 20% to 25% of current jobs — equivalent to 40 million displaced workers (3). The benefits of automation will likely flow to about 20% of workers — primarily highly compensated, highly skilled workers. As a result, automation has the potential to create a seismic shift in the skill levels needed in manufacturing facilities over the next 10 years.

Once you install the turn-key robotic cell with help from your systems integrator, then what? If you have a problem or want to change something, you are going to need the capabilities in-house to address the programming requirements. Brennan Palmiter wrote an interesting article about this in the February 2021 FIA Issue (Who’s Going to Program My Robot). There are many integrators out in the market that can help with robotic programming, but as a manufacturer, you will want to invest in re-skilling your labor to address this technology shift and the overall shortage of labor.

Faced with a rising scarcity of labor, companies are likely to draw increasingly on automation technologies. But with fewer labor employees, how should we look at these investments in automation?

Typically, productivity is measured by the output of production for every labor hour. However, with the increasing usage of automation equipment, you also need to weigh a comparison between amortizing the upfront costs of capital to the reduction in labor costs. One way to do this is by deciphering labor costs for your equipment. My undergraduate economics professor would likely give me a dissertation on how this does not fit the traditional model of economic theory, but I believe it is a fruitful way of looking at our new world with robotics and automation equipment. Today, robots (and Feedall’s Model 4800 Billet Feeder — sorry for the plug) are already cheaper than human workers in every advanced economy and less than the current Federal minimum wage. 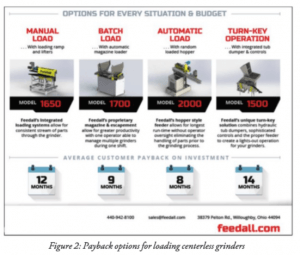 By enhancing the productivity of their human counterparts, automation will likely make manufacturing costs attractive closer to home. So, paying your robot minimum wage would be a pay raise for most robots on the market.

The fourth industrial revolution has begun, and the question you need to ask yourself (and your teams) is how will you weigh these new investment decisions? Traditional ways of measuring Return on Investment without looking at the intangible dynamics at play regarding the shrinking labor force and re-skilling labor will put your company at a disadvantage. With automation technology increasing the competitive advantage of typically higher labor rate economies, we should ask Thomas Friedman if the world is still flat or if Christopher Columbus was correct in 1492.

Author Jon Cocco is the owner and CEO of Feedall Automation in Cleveland, Ohio. He may be reached at jcocco@feedall.com or 440-942-8100 or follow him on LinkedIn at www.linkedin.com/in/joncocco/. For additional information, visit www.feedall.com.

We welcome you to fill in our online rfq with your equipment preferences, tooling requirements and applicable options:

Stay informed with the latest news and announcements from Feedall.